Today see’s me in Norfolk again, plastering at a mates house in Sedgeford. No Jackson today and I planned to run here after work, around the by the coast. I got finished a little early. The sun was out, so decided to run to coast from Justin’s. I knew the way from MTBing here and running, when I lived this way. So roughly guessed it would be about 10 miles. I didn’t have anything to take my phone in, so Justin lent me Rachel’s running belt.

I set off and ran through the playing field and down the hill. Turning right at the tennis courts,and across the road. Down the no entry road to join the Peddlers way. About half a mile I turn right and head down the Rocky Balboa! Named by the MTBers. The temperature is perfect, it’s a bit muddy in places but otherwise not too bad. Straight over the next road. Along the road for a bit then straight onto the next trail. Past 2 or 3 dog walkers and a couple of twitchers. I forgot how nice it is to run here, nice countryside and rolling hills. I eventually get to the trig point, looking over Thornham.

Drop down along the road to get back into the coast path, all the way to the beach. Over some new and old boardwalk through the trees at Holme nature reserve.

This is one of my favourite running trails in the area, the coast path from here to Holme next to sea.

As I was coming out of Holme along the road Dean called. It just happened to be the toughest part coming up. Back on the Peddlers way, up hill on singletrack and muddy. By the time we finished talking I was just coming into Ringstead. I run through the village, past the village shop and the Gin Trap pub. Then turned left still on the road untill the right turn on the corner. On this up hill trail out of Ringstead, a weasel crossed my path 👍 a bit further on I see these beauties, as the sun was going to bed. 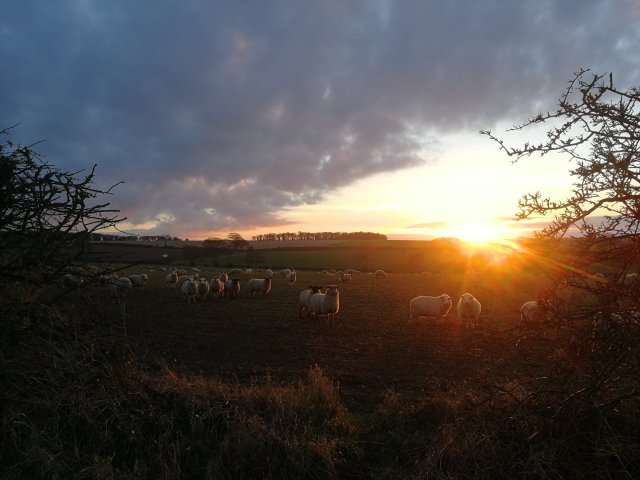 I stayed on Peddlers way to Sedgeford, then followed the road back to Justin’s. Gave him Rachel’s belt back, had a apple and left. Said I’d be home for 6pm, it was 5:45pm 🤔 it was a bit further than I thought.

One thought on “Day 52 Norfolk Trails.”