Didn’t run this morning but felt loads better, not 100% but on the mend. Had a nice walk with JB instead. After work -I’m working in Oundle- I get ready to run. I see Emma run past while on our tea break. Shouted at her but she didn’t realize it was me, ha ha though we was dodgy while van men. Anyway I set off towards the river, passing the Wharfe and over the bridge. Through the gate and across the field to the Nene. There’s loads of pollen blowing in the wind, looks like snow or thousands of tiny fairy’s. I took loads of pics trying to capture it, but failed. I noticed I was pouring with sweat while doing this, it got so hot and humid. Hopefully these thunderstorms are close, never ran in a thunderstorm, finger’s crossed. I followed the Nene way along the river.

It was a bit overgrown in places, need more cows. More nettle stings too 👎. The thing is I’m feeling really good, I’m like a new man. I’m riding tonight so don’t want to over due it, so tempting to do a long run. I get to Oundle marina, which looks nice and chilled with a few people buzzing around.

Turn right on the main road towards Oundle. Taking in a loop of Barnwell country park -be rude not too- then through town and back to the van. No rain but wet enough from sweat 👍.

So I go home and have a bowl of granola with Greek yogurt, blueberries and raspberries. Have a catch up with Babs and the boy. A quick shower, get sorted and ready. Then I rode over to Castor to meet Nick and Leo. Only 3 of us tonight, a third of the team. We had a great training ride, tough but we’re getting a lot smoother. Just shy of 24 miles and back to the Royal Oak. To get the piss ripped out of us for looking gay in lycra and to have some beer. 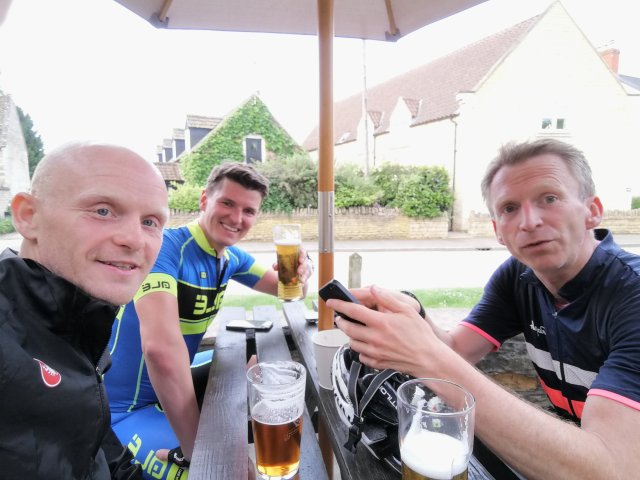 Another good night. So with riding there and home too that’s 36.2 miles done ridden 👍