Drove over to Wales last night and got here about 10ish. I parked at Gwern Gof Uchaf campsite, maybe it’s a sheep field people camp in actually ha ha. Can’t complain though as only cost £1, which I don’t think anyone pays. Got my bed set up, had a cup of beer while looking at the map. Then got my head down. 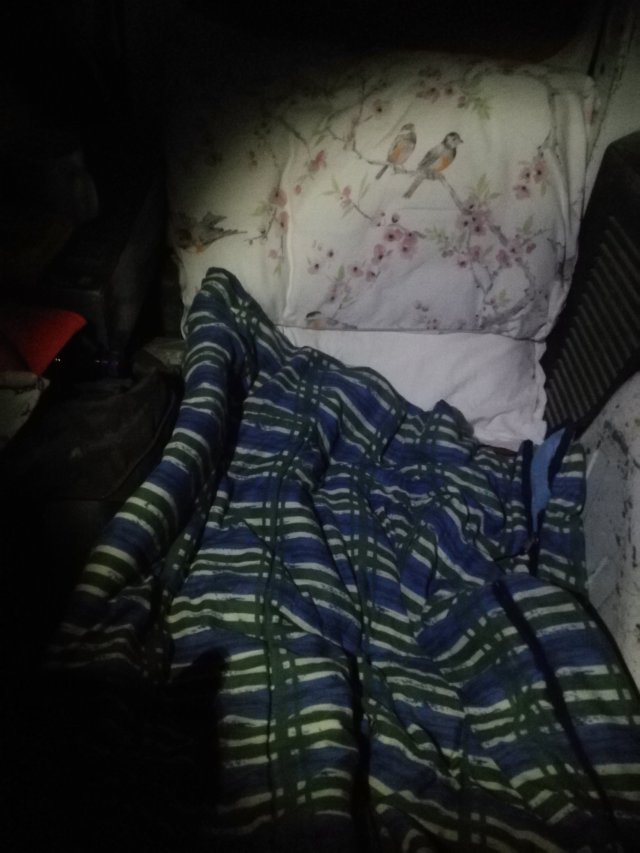 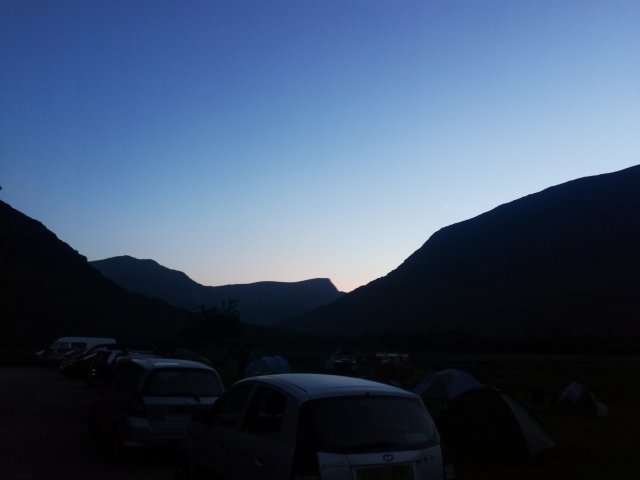 Woke up early about 4:45am I think. Had my granola and a coffee, got ready and set off around 5:30am. It was warm already. The route started from the site but didn’t stop me getting it wrong and wrong again. Ended up on the wrong side of the mountain and the stubborn bloke I am, I refuse to go back. Idiot! School boy error one. Got myself in a right pickle, beautiful views though. 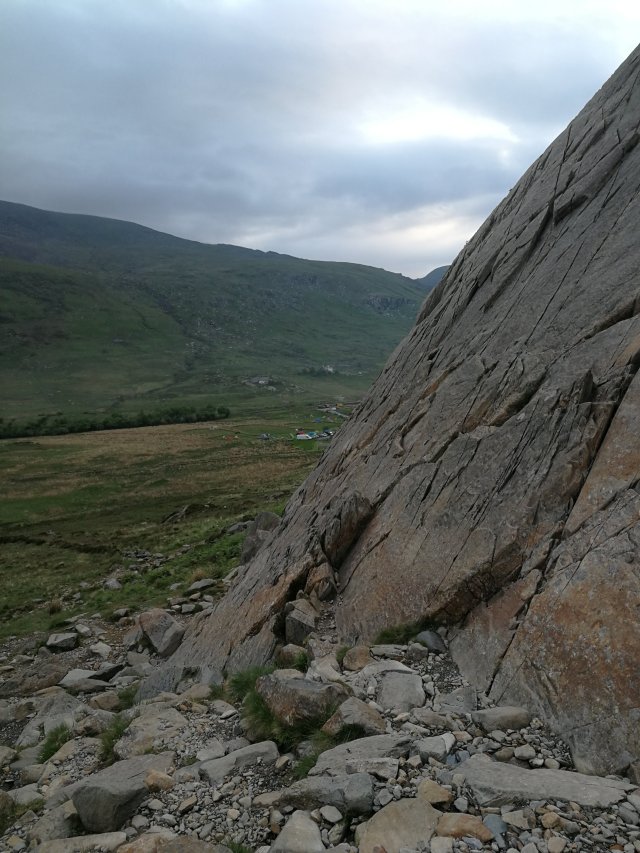 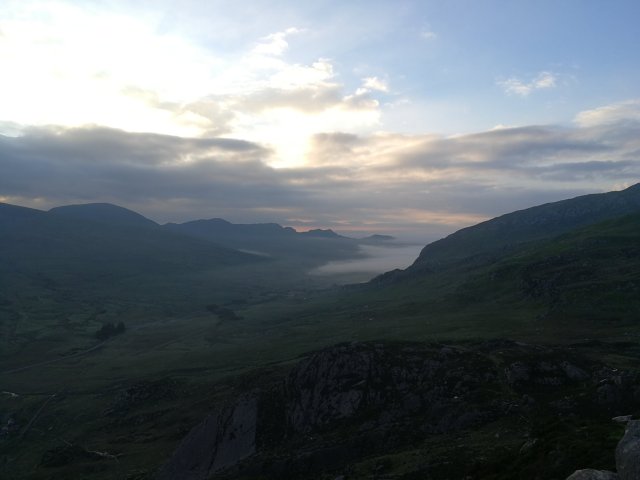 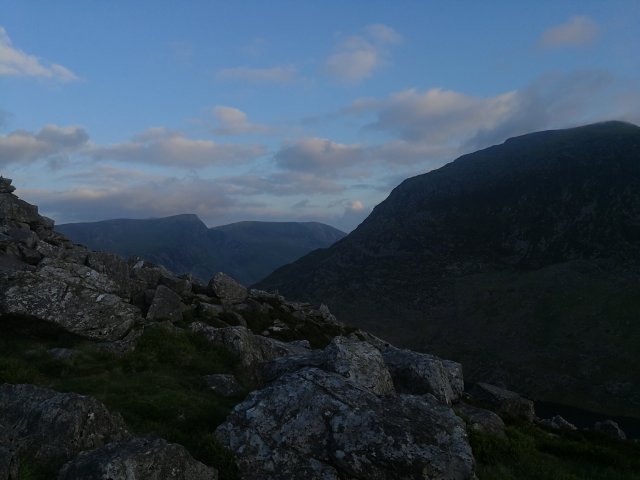 After alot of scrambling a bit of climbing I got to the top, and bumped into these fella’s. 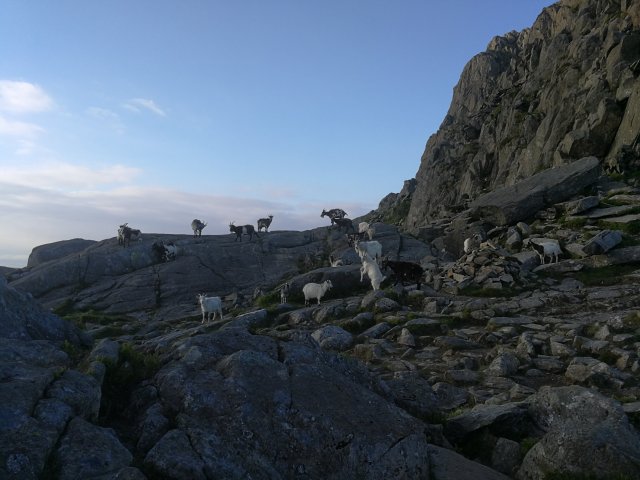 I’m not gonna lie I nearly gave up and quit. Had to have a sharp word with myself. Scared myself on some of the climbing, I ain’t ashamed to say I wasn’t in a good place and close to tears, with fear and frustration. Silly to take them risks on my own But glad I did because I feel I’ve got a bit closer to overcoming my fear of heights. Plus check out the view from the top. 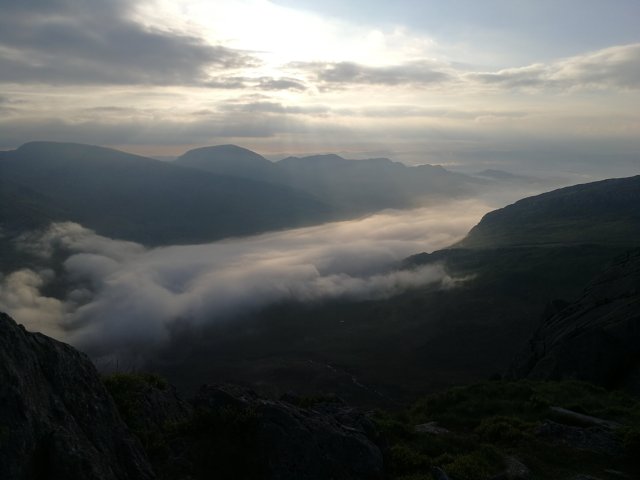 Just had to slide/scramble and climb down a long steep bit down to the path now. There’s no way I’d of had the guts to this, if I hadn’t of done the other climbing. I took this pic but believe me when I say, it was a lot worse than it looks. 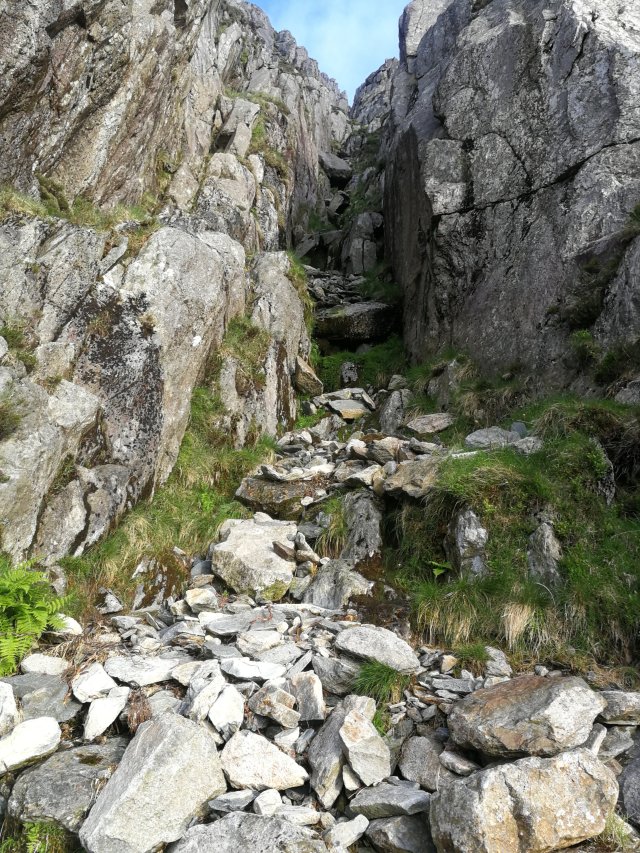 Back on the path. Nearly an hour and half to do a mile and half. Never had that before and I haven’t even ran yet. To be fair the whole route was barely runable. Very rocky and a lot of scrambling too but ran what I could. I’d be lying if I said I didn’t want to go back to the van now. I felt knackered from the climbing and stress of it. Times like this make you stronger right? I carried on. Still hard going, I find the path though. Unrunable for me so I walk as fast as I can. I pass a couple coming down, they’d camped next to the Tarn over night and was heading down for a bike ride, sounds perfect. This first climb is not an easy one, I don’t know how I’ll fair after around 15 miles in on ultra day. Even the downhill is tricky, very boggy and loose rocks on small paths ( got lost here slightly too 🤔) got my first glimpse of the old girl though, well sort of. 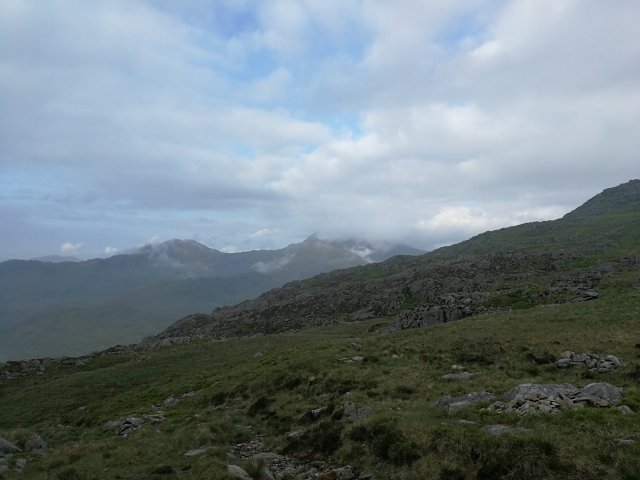 She’s in the cloud in distance. After a harsh descent I get to road. My legs was ready for this but not for long as back onto the trail. I choose to not follow the GPS track as it hasn’t done me any favours yet. Plus the path I take say to Pen-y-pass, I take it and then the pyg track upto the top of Snowdon. Was able to run some of this but if any of you have walked up it, you know it’s not the easiest route. A least there is the odd nice bit. 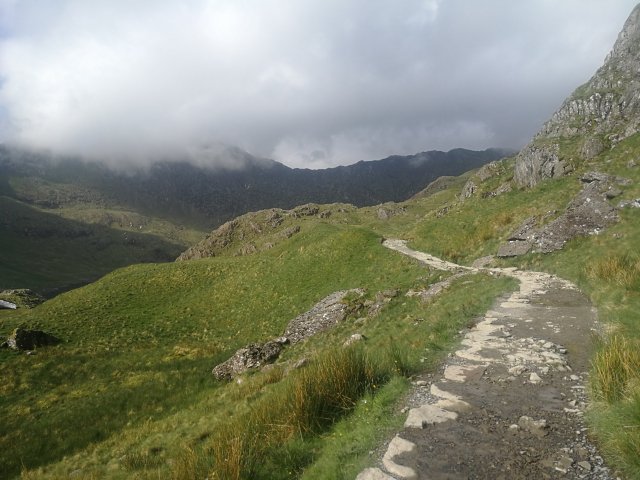 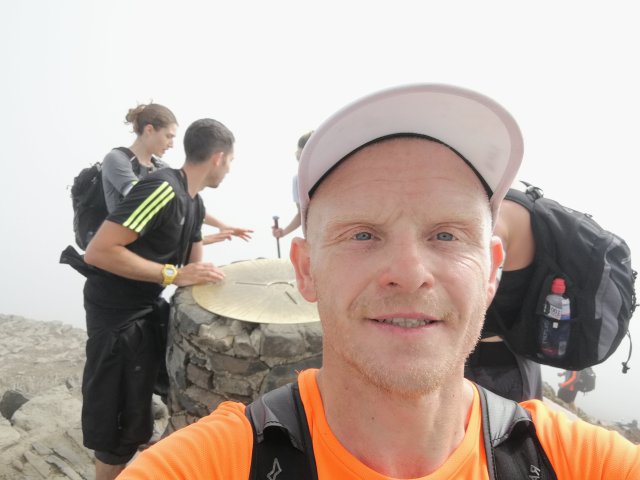 Seemed a long time coming but made it 👌. Didn’t have great views but had a little, very busy as always up there though. Got a coke and bottle of water to top my bottles up. 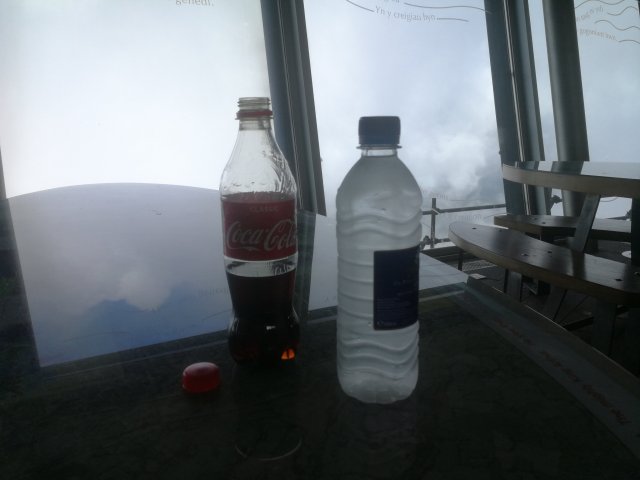 Then set off again. Did it again, started off down in the right direction but not the right way. Instead of going back and looking stupid. I thought I be stupid and work my way across loose scree and dodgy rocks, untill I got back to the path. Easy going now, heading back. Hardly! Soon back to scrambling up the next climb over the top of Bwich Cilian. Loosing and finding the way continuosly. Was fed up now, it’s been a long hard day and still a long way back. If only I could run to cover some ground. I did get a nice view back at Snowdon though so shouldn’t grumble. 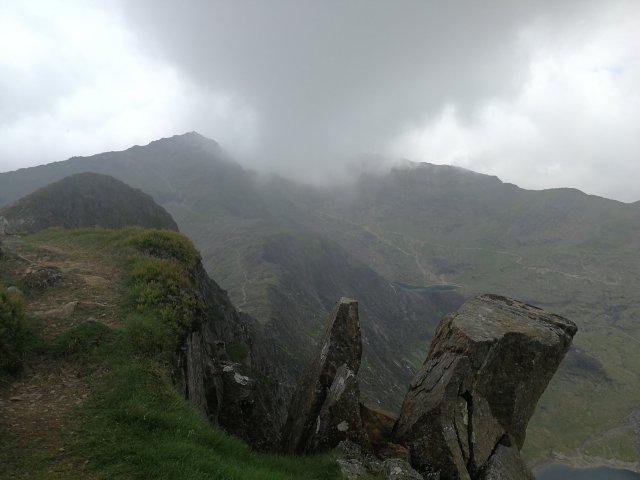 A bit of a steady descent then I’m on the miners track, yay. I run this all the way Pen-y-pass. Stopping once to take a picture for a group of walkers, my good deed for the day. I feel good so good infact, I don’t stop to refill at the shop. I even enjoy the rocky path I came up earlier. This Is why I’m frustrated with myself. I see a little single-track to the right. Check my GPS, that’s where I should of come up. Could not for the Life of me see a path from the other way, just looked like moorland. Even though I’m knackered and maybe because I was knackered I take it. Seems ok a bit tough but sort of runable. Then boom! I need to leave the trail on to the moorland. Bugger bugger knobhead! Why didn’t I just stay on the path. So the next half hour I trip, climb and moan my way back up to the path. Stupid bloody recce route, starting to think the organisers are masochists. Because of this mistake I’d drained my drink down. Was down to a bit in one bottle, with one tough climb left to do. Not ideal but just want to get back now. I go up the way I came down and man it’s a hard climb. It’s very hot today too and now at midday, really warm. With no other option I have to top my empty bottle up from a little waterfall, tastes ok. I wash myself down and carry on. After what seemed a lifetime I reach the top. Through the boggy stuff and find the route down. I spotted a path from the top earlier and I’m talking it. Goes straight back to the campsite. Fuck the rest of the recce I’m done. Don’t get me wrong I’ve really enjoyed the day, even though I’ve moaned alot. I was just expecting it to have more running. The path now is runable in places and I pass a man in an GB ultra top. Bet this is the route they use, not the one on the GPS, buggers. I pass another runner going up. I’m happy now I and I can see my van in the distance. I’m on tired legs but kind of running. Then Noooooo! I trip and fall Head first. I wait for my head to smash against a rock. Luckily and I do mean luckily, I took the fall on my arms and hands. Bend a finger back, graised my forearm and bloodied a finger. Could of been so much worse. I tried to get a pic of my finger but the camera had steamed up. 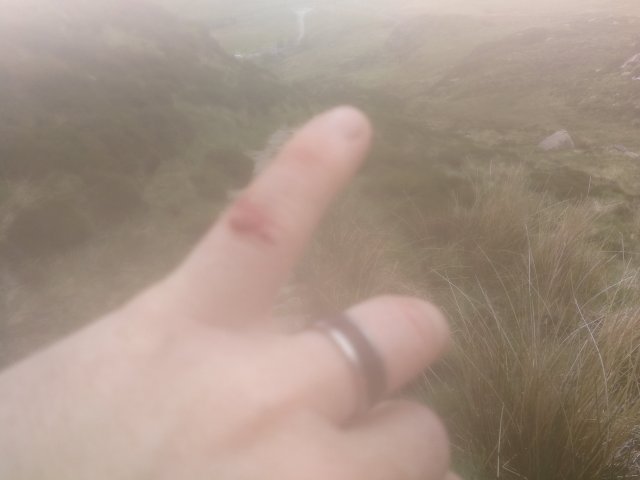 I see that Babs had called, so called her back to let her know I was ok and nearly back. I’d tried to use a tracker so she could follow me. It didn’t seem to work too well though, shame.

Got back and downed some milk and then snacked. Had a cup tea, had a nice hot shower, Got sorted and set off. Stopped for some food and to write this blog at Conwy falls cafe. I had a very nice chicken burger and chips, banana milkshake and black coffee. Then finished writing this while laying and chilling in the back of the van. Gonna have a bit longer then start the drive home.

I underestimated the difficulty of the route.

Should turn back when I go wrong.

Should of done a sock change at the top, as feet looked minging at the end.

I feel I’ve had a real tough challenge mentally as well as physically. I’ve definitely come away from this experience a stronger better man. It has left me slightly worried about the ultra but now I know the better ways to go, It won’t be as bad on this part of it.

Sorry it’s a bit long today but loads to put in. I have missed loads out too but tried to keep the main bits.

Even though most of it was walking/climbing and scrambling I’m still claiming the miles.