Woke up at 6:30am and initially thought I’d slept in -slightly wished ha ha- Felt like I’d slept well, which ain’t bad as I only had 5 hours max. Had a bowl of granola and some milk. Used my porta loo 😎. Then layed back in bed to let it settle. Spoke to Babs and told her I was 50/50 to do it or not. It’s pissing down outside and my motivation is low. She’s her best to gee me up, but failed. Nothing to do with her. I head to sign in and see what happens. As soon as I see others ready to go,I’m keen and made my mind up. I called Babs to tell her it’s on. So I park up, which is the other end of the village. Get my stuff on and walk to sign in. Get a a cup of tea and some toast. Only one safety pin left 🤔 that’ll have to do as not enough time to go back to my van. Race briefing is starting, we all head outside. Before I even get gps sorted on my watch, we’re off. In the rain , through the lovely little village of Grasmere. Famous for a lot of things but mainly it’s gingerbread. (Which I got a peace at the finish)

Once out of the village and into the fells, we start our first climb. I was a good un.

My plan is to play it cool and take it easy. I can hopefully ramp it up later. I feel great as we drop down into Ambleside. It’s still raining but doesn’t seem as bad on tarmac. Coming out of Ambleside, we climb up a steep gravel road leading us back to the fells. Then more climbing 👍 still keeping cool, nice and steady. At the top we had a check point to hand a number tag in. These people are amasing, standing in the cold wind and rain, so we can go for a run. You should always, Always! Thank the marshals. To be fair it was up and down some brilliant trails, some easy and some very technical. This and the weather was pretty much the same through Troutbeck (where our first feed station was), Kentmere and sadgill. Was raining on and off but still nice and comfortable. 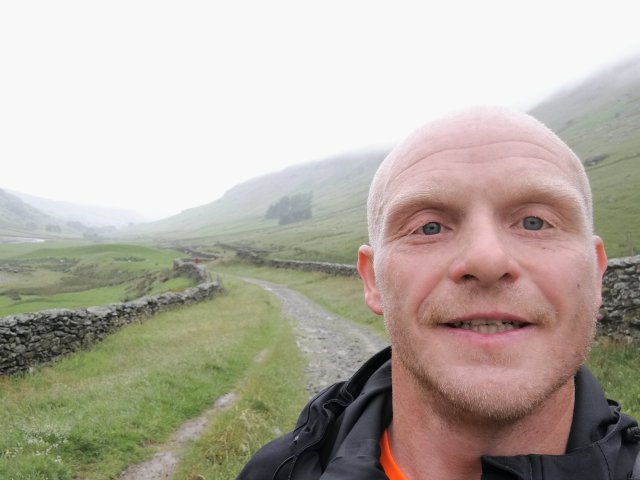 Then as we headed up to again, It pissed it down and the winds got mental. Horizontal rain and very cold. The next check point was basically a tent with a hand sticking out. Don’t blame them one bit. This was like this for a good 12 miles. Harsh. Really harsh. It ended up being a brisk walk as a few of us had bunched up. A bit too dodgy to run, so windy and wet. As soon as we could we started running though. We all just wanted to get to the checkpoint and feed station at Kirkstone pass. We was running in path that are now streams and bogs, stepping and jumping wet rocks. Climbing, slipping, tripping the lot. Great fun and I wanted to take so many pics but the water was messing my phone up. We had 2 extra safety checks along this stretch, we head to tag in at. The second one had a bag full of sweets, I put a handful in my gob. Picked me right up for about 20mins ummmm. I noticed a bloke has been following me for a while, he’s spotted I had a GPS, for the route. Fair play. We catch the lead lady just before Kirkstone, after a struggle we find the check in tent. 2 cheese and pickle sandwiches some crisps and full fat coke. We head up and I mean up the next climb. Technical and very slippery, it was literally a waterfall in places. Proper smart.

To be honest I’m writing this blog while laid in my van. I’m pretty knackered now, so I’m gonna cut the last bit short. Not because it’s not worth a mention but I don’t think I’m doing this any justice in writing. The bloke was called Joules, nice bloke but I left him in the last 2 miles. The sun came out and revealed a beautiful valley and eventually lake Windermere. I felt great all the way to the finish and felt at a good pace through Grasmere to the finish. 14th position overall (provisionally) stuffed my face, had a chat with people, rang Babs and here I am. There’s so much that I could put about today, it’s a bit overwhelming to be honest. Keep it real and keep going. 👍.