Didn’t sleep well last night it took ages to switch off. After a shower and breakfast, I felt better then yesterday morning though -no hangover-. Today’s ride we’re driving over to La Reposoir to start the ride from there, saves doing the whole Colombier again. Tris had planned a 69.5 mile ride with just under 10,000ft of climbing, 2 mountain climbs. It seems like a big ride but we’re all happy to ride. It’s a very hot day again, feels warmer than yesterday. Maybe this was because we started later in the day. Alot of main roads for the first 20 miles, busy but not like England. We had a nice pace too, still very undulating. It was going well until ouch! A wasp or something landed on my face, i see it coming too. It sting me before I could slap it off, along with my sunglasses Doh! I shouted the others but they didn’t here me. Once I’d got there attention I bike back up the road, Rich and David followed me. Rich spotted them but unfortunately game over for them. The group treated me to a new pair though. 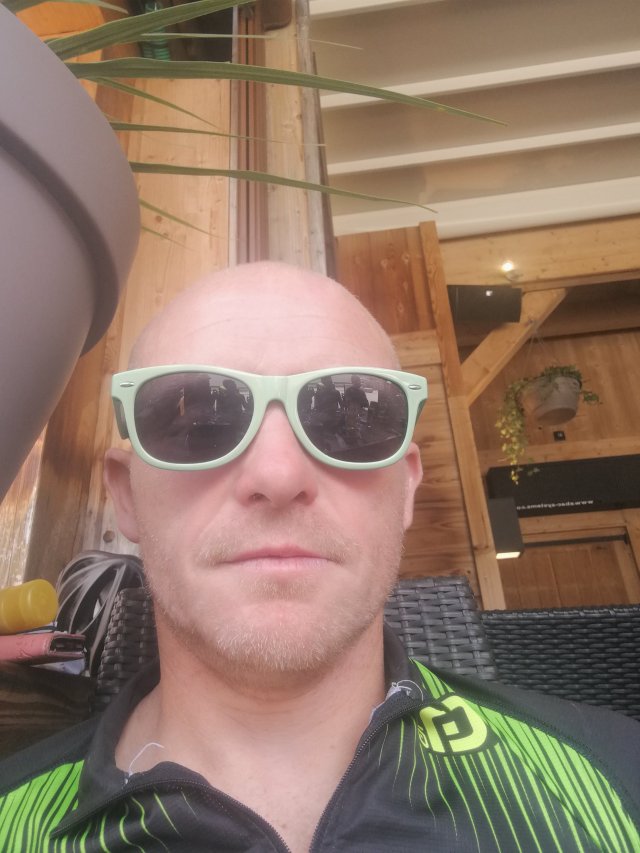 Emma nagotiated a deal off the bloke on the market stall. This was in the lovely village of Samoëns and also the start of the climb up the Col de Joux Plane 1690m. Just over 30 degrees now and it felt it. Tris, Dunc, David and Westie fell into Rich’s game and off they went. Me, Emma and Amy stayed doing our own ride at our own paces. It felt tough today, so my pace and power was a bit lower. Amy was a machine and flowing well, she came past me making it look easy. I kept her in my sight when Rich came flying passed -he went down to check on Emma and ride with her- David and Tris had stopped to wait at this view point. 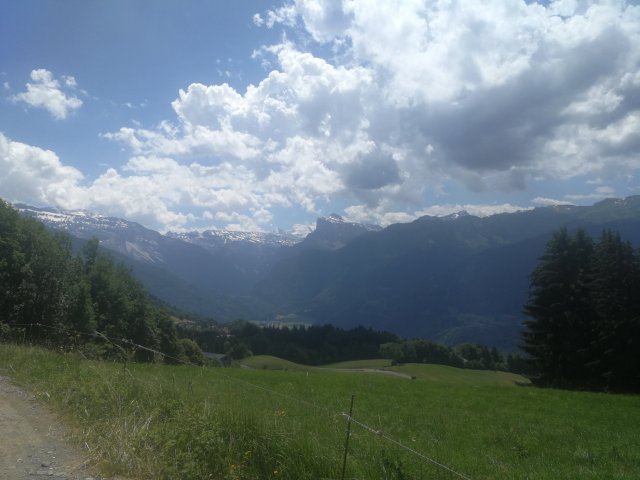 They’d all set off again by the time I got going. With about 2k to I found my legs and powered on. Past Amy and Tris, didn’t catch David though. At the top we refueled with cola and ice-cream. Also bumped into a group of people from Kettering, small world hey. Once everyone was happy we carried on. A bit further around the mountain to a ski lift, we then start the decent down to Morzine. Loved it, what a great bit of road. I felt better on my bike today too, Rich had give us some tips for downhill and my brakes worked better (I’d cleaned the rims). Pizza and beers in Morzine, had to be done and man it’s warm. 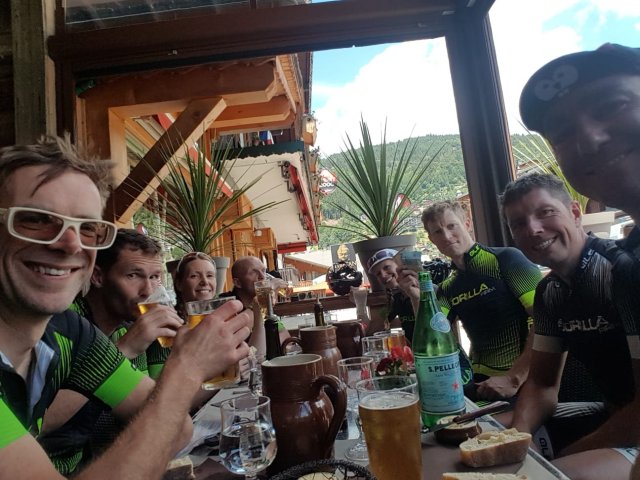 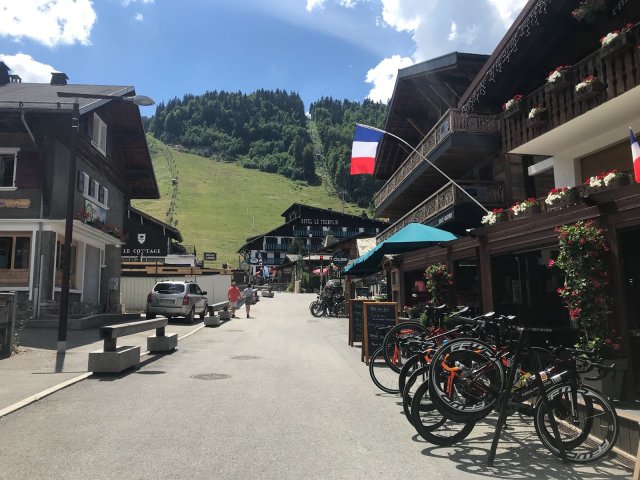 It was here we all decided doing another big climb would be a bad idea, plus time was getting on. So we took a more direct route back to Cluses. Rich,Wattie and tris decided to go over Col de Romme and me,Duncan, David,Amy and Emma take the still very undulating with a nice climb, main road back to La Reposoir. I finished feeling strong here as felt the best I’d felt all ride. A wash down and drink from the fountain, very refreshing. Then we got beers and waited for the three machine’s to get there,we didn’t have to wait long. It was around 7pm so after a beer we set off back to the chalet. I decided to do my run on the way back, I had my trainers but nothing else. So ran in my cycling kit and borrowed Tris’s watch. Rich dropped me off near the top of the Colombier. It was the trail I rode down on the ebike bike on day 1. Adsolutely loved this run, a nice runable downhill trail. The only fault was it wasn’t long enough, so had to run on road to get my 2 miles in. Rich stayed with me so I could jump in the car when done, thanks mate 👍. He also got some amasing drone footage of me again.

Wish I had this facility on all my mountain runs 👍. 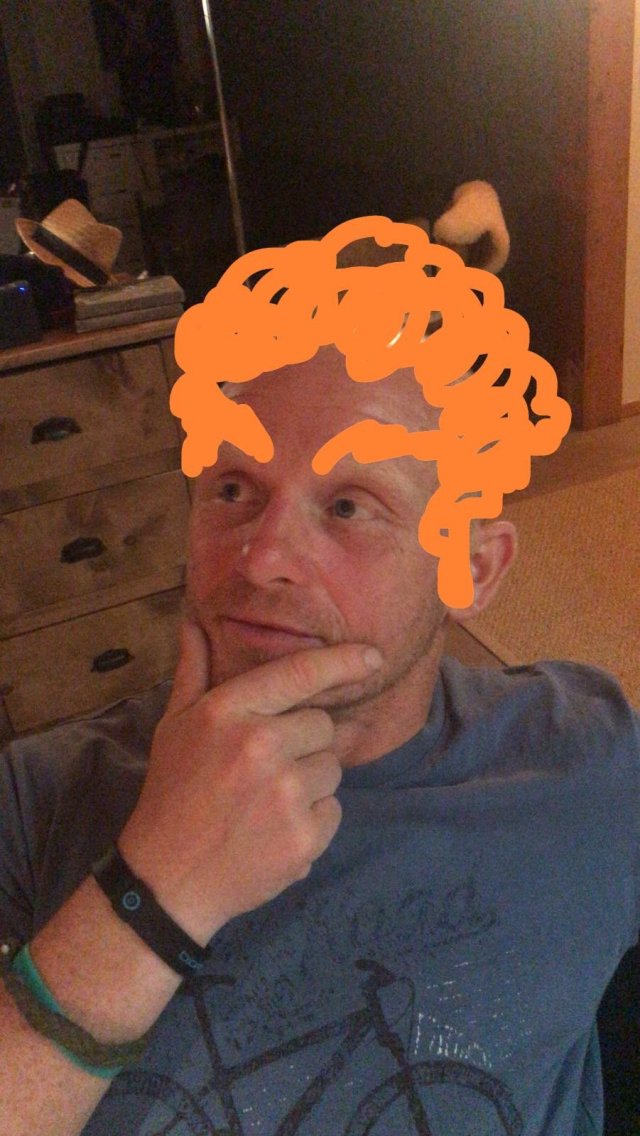 Then more drinking over food which Emma prepared. As we know tomorrow is a rest day, it’s another late one. Also stood outside and watched the thunderstorms. I first see them while on the phone to Babs.