An early start today, was up at 5:30am and on site for just after 6:40am. To be honest though I had a rubbish nights sleep. We’re staying in Stevenage which is still a 30-40mins drive to the job. It’s a nice apartment but bloody noisy outside. From traffic, boy racers, drunks/druggies shouting at 3am to noises inside the building. What I’m trying to say is, I’m cream crackered and ready for my own bed. We finished just after 1pm and was glad of it, bloody heat trap and out in it for the last three days, today feeling the hottest. Concreting and laying concrete blocks today, no need to explain why I had to pull over for a coffee and a power nip.

Eyes was getting very heavy. Just want to get home to Babs and JB. First I stop at the Woodman to do my run, it’s only gonna get harder the longer I leave it. Would like to run with the boy but definitely too hot for him, so I get changed and set off. The normal path into Ferry meadows is blocked off, hedge cutting. So I run past the leisure centre and cut through to the trail there. HR is low but it feels laboured, must be fatigued still. Or just knackered. Anyway I up the pace to get it above 125 bpm, after about a mile. That got it up and felt better for it, so kept it nice and smooth. Not many people about really, it is hot. I past an older fellow, stood in the shade of the tree having a rest. Me, I was enjoying the heat. Sort of used to it now and it’s better than working in it. Got my hat on and my new €5 shades, my vest and cut off shorts. Living the dream. There’s more people around the sailing club area but not busy at all. 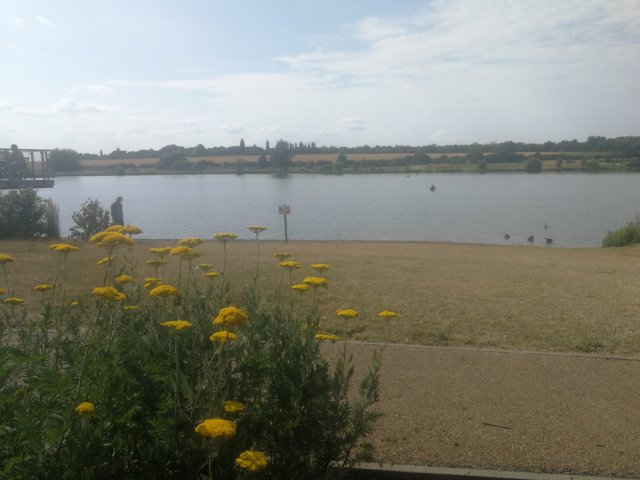 I cruise throw the middle of the lakes, just enjoying it, feeling the heat, excepting it. After the big wobbly bridge I turn right, along the Nene and next to the golf course. There’s a chorus of song, not from the birds though. From the insects, I did get bit but I don’t mind, I’m used to that now too. This is when I realised that the birds aren’t flying. Only the ducks and swans are out, must be on there siestas. The water looks welcoming, shining with a warm glow but not today, I need to go home. Past Orton mere I take the trail alongside the Nene parkway, past the Holiday Inn and Woodman. Then back to the van, that’ll do for today. Go home and the boy is striaght on me, he missed me 😁. I think Babs did too, as she was waiting in line. I’d forgot she was out tonight so a quick catch-up, then she had gone. A bit later I took the boy for a nice swim down to the river. He was striaght in, then fetched the ball a million times.

Had my first blackberry, a bit sour but not bad. Looks like it’s gonna be a good crop.