Well well well it’s wet wet wet. My sort of weather but not everyone’s ideal. I slept well and the bed didn’t want me to leave it this morning. Jackson had other ideas, as he scratches the downstairs door. He’s ready for the toilet and his walk, so I get up just after 7am. It’s pissing it down outside, the boy ain’t so keen now. I decide to have my porridge first and take a coffee with me. It wasn’t cold out but the rain was heavy, I realised my dog walking jacket definitely isn’t waterproof. Get back and have poached eggs on toast and a cup of tea. Babs is ready now and Helen turns up too. We have a chat, there both really nervous but Helen probably a bit more so. I go for a hot shower and get ready myself. Vest, shorts, new trainers and my S lab jacket today, oh and my black cap. I use my Etape rucksack as a joint baggage holder. This way I can get changed and give them dry stuff straight away too. We leave as late as we can to keep dry and warm.

After food and warming up we all feel great about the run. Babs and Helen both got times they wanted and Babs would have got a PB, if her glute was ok. 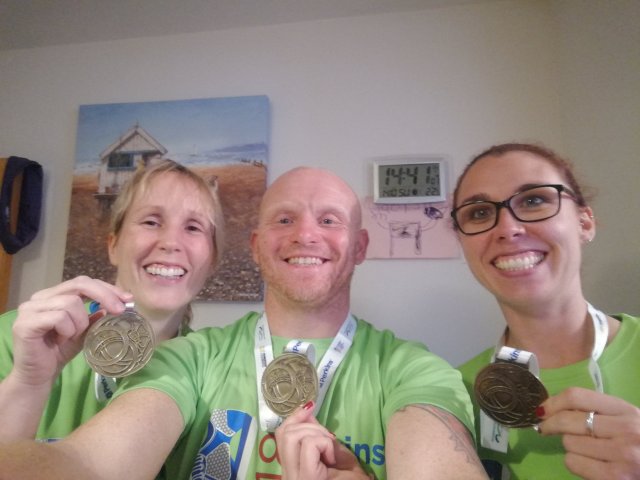