Didn’t run this morning, got up at 5:15am and didn’t feel great still. Enjoyed the walk with the legend instead, even though he nearly lost his ball 😎. A foggy drive up the A1 to work, getting me there slightly late. Another tough day on the roof before heading back to the digs. With the Monday weekly shop at Asda first. All settled in the room and Andy’s mentions, did I see the sign for an event going on tonight? Well I hadn’t but was keen to check it out. Got my running stuff on and handed out. Well well well, busy it was. I just follow the crowds, which happens to be where I was gonna head anyway, Fairlands. Loads of families with flashing sticks lighting up the streets. Getting them from these stalls that are scattered about.

The people are flocking in, I blindly do my best to avoid running into them. I head around the lake towards the music. 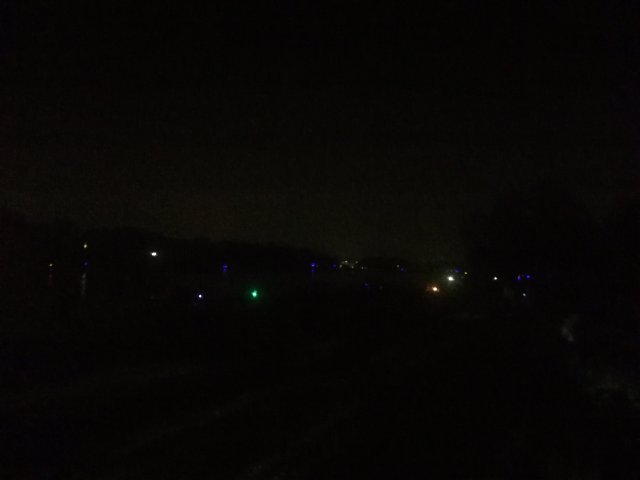 When I get to the main event, I call Andy and tell them to come over. He said they’d rather watch out the window (fair do). The main thing I’m gutted about is, I ain’t got no money on me. It’s not that I need to pay to get in, as it’s a free event and I’m already in. It’s that all I can smell is hotdogs and onions, it’s all I can think about. I can’t take it anymore, so start working my way back out and around everyone. Back to meadow on the otherside of the road. I decided to keep running up an down this field, while watching people’s fireworks going off. Part of the field is being used to park on and people are claiming little areas here, to watch from. After about 20 mins I thought maybe watching from the tower is a good idea. Just before I set off up the road, I ask a Marshall ” what times it start mate? ” ” In a few minutes ” he says. Ok I’ll wait, I think as the fireworks literally start to go off. I’m a bit far back and decide to leave and start to jog back. Then I have a word with my Sen and head back to watch. This time on the right side of the road near the lake. So much better and a good display. I thought I’d capture a small part of it.

Apparently it was a half hour show, so ran back which wasn’t far. Just in time to watch the big finale from the 11th floor. BOOM!