Said goodbye to Babs this morning as I set off to walk the boy. She was heading to dark Lincolnshire, to meet Lisa to join her at Boston Parkrun. I was meeting Helen to pace her towards a PB (personal best) at Peterborough Parkrun. But needed to walk the legend first. Just a short 45 mins, one down the Toll path on Potter’s way.

Was gonna bike there and back but was running out of time, so decided against it and drove over. Darren, Helen and Ben are going to the Beefeater for after run breakfast. They invited me too, which was nice and of cause I said yes. So thinking ahead I park on the layby oversite the pub, thought I can warm up and warm from here, plus would save time. The new pay machines plus people not understanding them, are a pain. as I locked up Grumps and a running buddy had just finished there 7.6 mile run. they would have gone further but lost time as they couldn’t get the new lock of the new gates, the warden had to break it.

A steady run in, didn’t even start my watch. I spotted Helen looking for me in the crowd, so I go over. We head over to the start and immediately realise somethings changed. The start line. A bit of confusion for everyone but all was made clear, when the run director did his talk. We’re doing it in reverse out of respect for those lost in the war, we also did a minutes silence. A lot respect there as you could hear a pin drop. we move towards the start line and we discuss the plan. Off we go. we got ourselves in the perfect position, no one holding us up and enough space. Helen leaves her jacket at the play area and we’re all good. It’s hard not to get caught up in the flow of things and go too quick. We was a little quicker than planned, not a lot but a bit but she seemed ok so stuck with it. I show her how to stick your elbows out a bit when it’s busy, this gives you more space. After the first km, the people that started too fats start to drop off and we pass a few of them, “this is good” I say “keep it up”. It’s actually warmer than I’d thought, was sweating myself and keeping under 8:30 mins for the first mile, we was on track for the PB. Maybe we started a bit too fast as she found km 3 tough and the pace dropped a bit. I tried to keep her going but was keeping steady until the last km, then I upped the motivation. She was well on for a PB but it could easily slip away on this last km, ” come on you’ve got this” “don’t let all that hard work go to waist” “your doing great, keep it up” “loosen them shoulders and use them elbows” I used everything I had and she gave everything she had. I point to a woman in a yellow top and say ” there’s your target” she said she can’t and I said she could. She did and not only that, she took the two blokes in front of her too. BOOM! 9 seconds off her PB, this doesn’t sound loads but it is. You could to 9 when your giving it your all. Well done Helen. I had to run to my van and back because I’d left my barcode in it, numpty. on my back the second time I stopped to talk to Steve Allpress, walked and talked for a bit, top lad.
We celebrated with 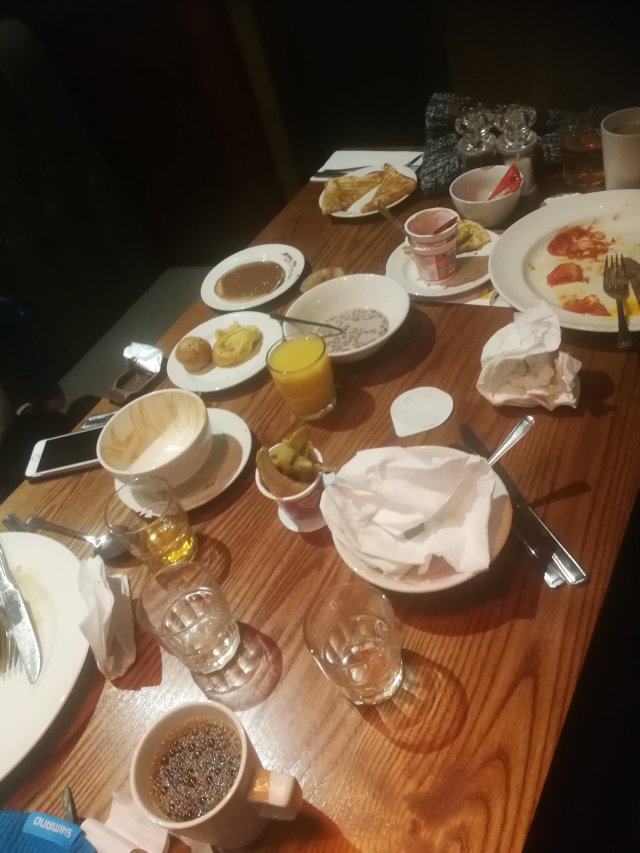 a big feast at the Beefeater.

I got there first so asked about opening times for the 30th and 31st of December for the run. I’ve booked 20 people, just in case.

So this leaves with my second run of the day. JB needed a walk and it was raining. I gave him the choice and he chose to run, good choice boy. I was still in my running bottoms, so stuck my damp top back on and off we go. It was around 3pm and already feeling like it’s gonna get dark soon. We head down the Toll path to the river, JB heads left towards the millennium bridge. Not today boy “this way”. Was planning to the ol faithful route, so we head down the Willows but go over the builders field. Which I wished I hadn’t as I had my road shoes on and it was a bit slippy. Never mind the boy enjoyed it, that’s the main thing. Down the edge the embankment back to the river, up to the sailing cadets building. 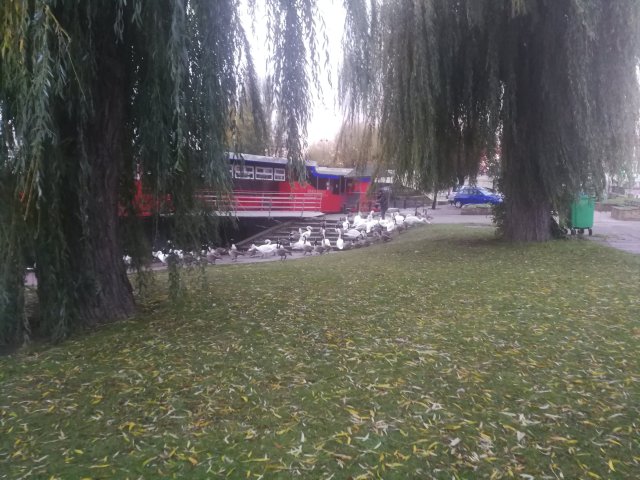 After crossing the road to go down Henry Penn’s walk, we can’t. It’s fenced off with a FOOTPATH CLOSED sign on it. There’s a big crack in the path, looks like it’s getting closer to water. They bodged it up but it’s already opened again, so bet that’s what there doing. Instead we just cruise around town, taking in the train station, waitrose, town centre and the cathedral. Back home to finish some bits off, write this and chill out. The house feels so empty without Babs and I always have loads to do. I do appreciate with you do, now get back and cook my tea.

P.S. I forgot to mention their was a Polish thing going on in cathedral square. Loads of chanting and Polish flags being waved about. I found out it was the start of the Polish independence march. Wonder how that will go?