Was out for beers and a Chinese in Keswick last night, with my parents and Brother and sister-in-law. Had to get this pic of the Moot hall.

I instinctively woke up at 5am and happily went back to sleep. Luckily I heard my phone buzz as it turned itself off 😲 flat battery. So I shuffled around my bag to find the charger- waking Babs as I do. It was 6am I hadn’t planned to get up till 6:30 but I’m awake now so got ready and laid in bed for a bit. After a sneaky snooze I got up and said bye to Babs. Messaged Dave to say I’ll be running in 5. He replied with.

Morning fella… you are on ur own for leg…. sorry… in bed listening to the wind…. how’s Keswick??

I told him no worries and it’s cold and windy. What I should of said is its also dark and I’ll need my torch ha ha. I realised after the first few minutes that I’d made a mistake not wearing it. I’m too stubborn to head back, idiot! After struggling my way around Crow park, I was glad to use the light from the theater and cafe. 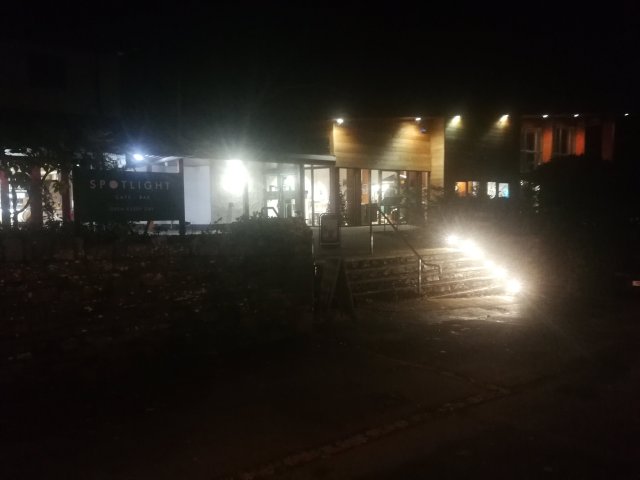 Heading around the edge of the lake path from here and I nearly go straight into the lake ha ha. It definitely gets light later around here, should have worn the head torch! After tripping on some small broken branches a couple of times and treading in deep puddles, the path stopped at a small stream. It was really blowing a gale out there. At this moment I had a brainwave, phone torch 😎. Still didn’t have much charge but should be enough. The light was just enough to give me confidence in my stride. So onwards and upwards, literally. It’s hard to know in the dark but it definitely felt rough going and felt like I was mainly going up. Once out of Great wood and it’s sneaky climb, I came out in the open to see Keswick, all beaming with lights. 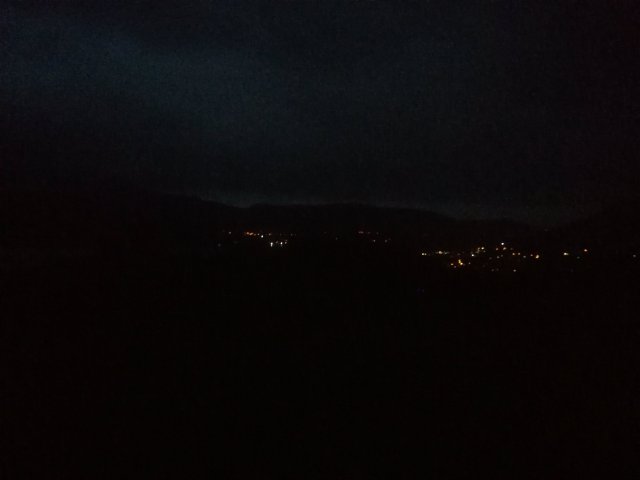 Didn’t realise I’d gone up this high. I’m glad I have my phone light on though, as wouldn’t want go off the path next to the stream.

Bit of a drop down there and a bit close to the edge at times. After crossing the water on the slippy footbridge, the trail brings me to the road. I can see alot better now so put my phone away. A nice steady downhill now, past the odd house, b&b’s and hotel. The lower I get, the busier the buildings become. It’s really nice this end of Keswick, can’t say I’ve been up here before. Then I see something glowing in the distance.

When I got closer, I see this. It made me smile and feel a bit christmassy. 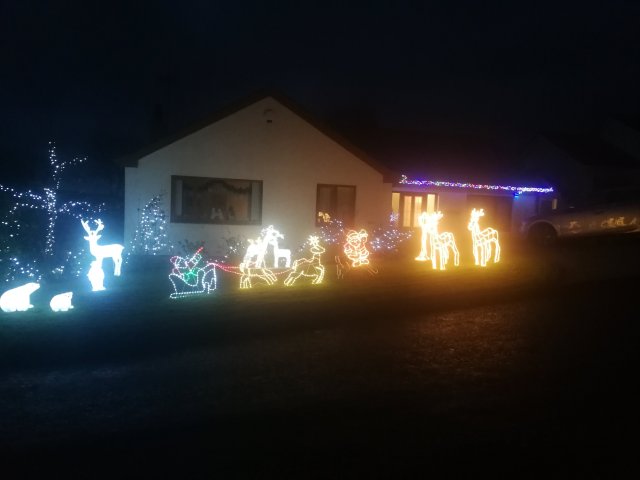 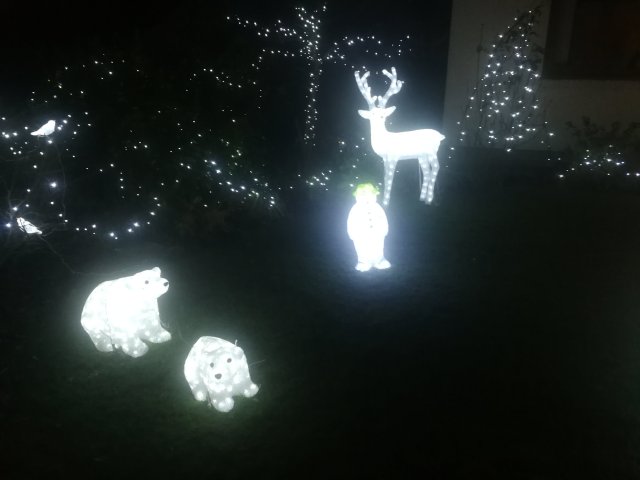 After making my way through the streets and nearly crapping me Sen- this is when a bloke with his dog walked around a corner in front of me ( The first person I’d seen the whole run) I soon found myself back at the Hotel. Where my dad was outside having a smoke. Had a little chat with him, then went into Babs, opened the window and carried on the conversation with dad. Our window opens onto to side path. Well it did. We’ve now moved to the top floor, as mum,dad,Carl and Ally have gone home. My brother Terry has took a turn for the worse, so obviously mum and dad are in bits and needed to go home. We also thought about going back too but although I’m upset and I love him, I’ve excepted he’s had his time now and going back won’t make things better. We’ll go there straight from here tomorrow. Taking some good from a bad situation. We got a room with a view now and a chance for us to spend some quality time together.

But! Before we heard the news everything was going well and ticking along like clockwork. I’d done my run and Babs and I had walked over to the old station. We’re running the Keswick Parkrun together. 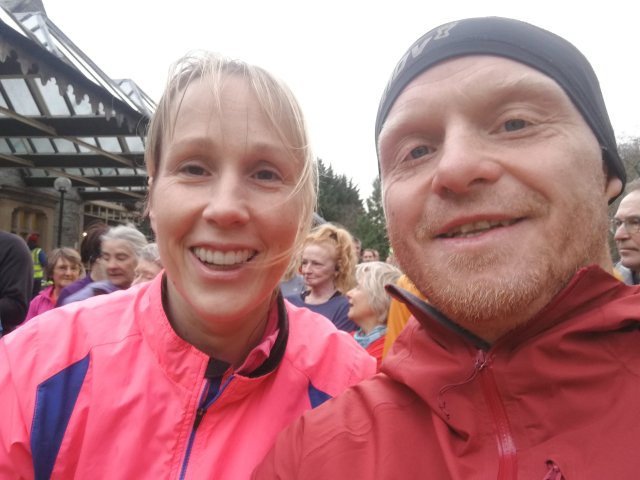 On the start line we’re looking forward to it, it’s both our first times doing this one. Although we walked it before, me a few more times, we’ve never done the parkrun. Off we go and the front runners speed off, I was tempted. The course is all trail with a bit of mud and puddles today. The wind is blowing well still and the odd small branch was laying on the course. We stick together and she runs it really well, it’s not an easy run either. It’s an out and back and a kind of up then down sort of run. She’s a bit steady on the boardwalk, so I really take in the views. She likes to pull a face now and then. 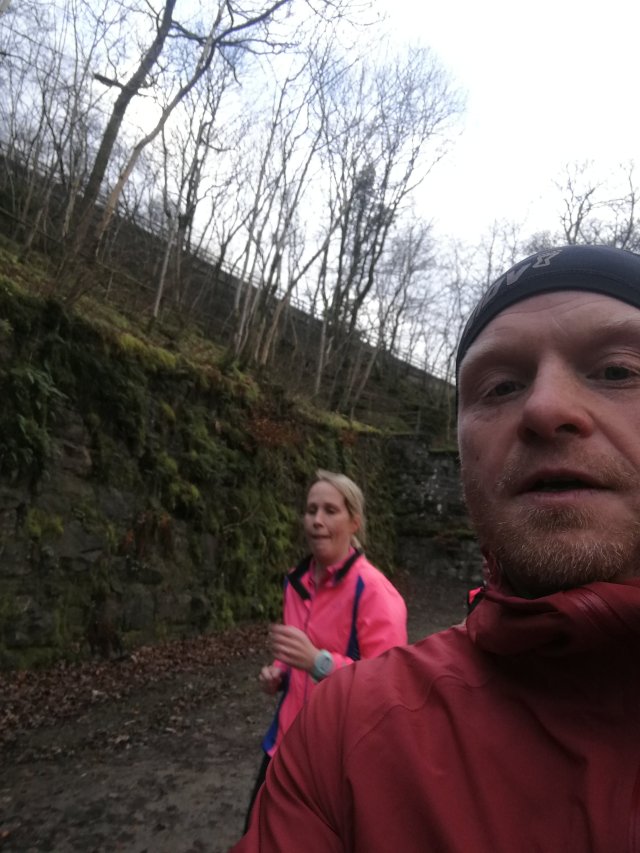 “I’ll get you butler” ha ha

Although it definitely felt alot faster, we did it in just under 30mins. We both proper enjoyed it too, we then took a steady jog back. Dad was outside smoking again, so a quick chat about breakfast. I have a quick shower while Babs gets a table. I was absolutely buzzing when I see these bad boys on the menu (Babs pointed them out). 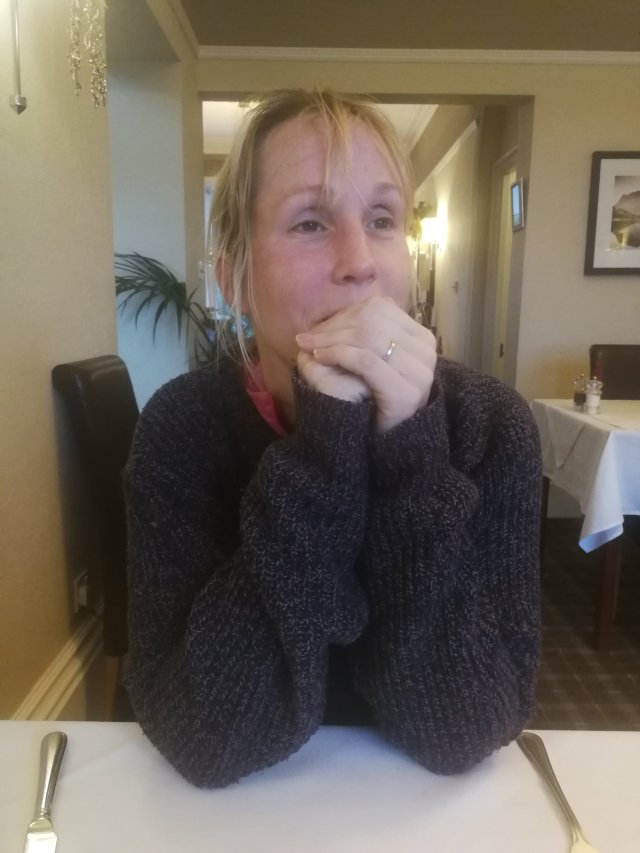 They all went to shops while we ate. Not long after this is when the phonecall came with the bad news and the mood instantly changed. I hate seeing my parents so upset and I know how much we were all enjoying the break together. Life rarely deals you the cards you want but you play with what you have and never fold.

We said our sad byes, then we went and did a bit of retail Therapy. That’s when I found these bad boys.

Can not wait to test them tomorrow, I may have to change my plan and do Catbells 🤔 give them a real testing out.